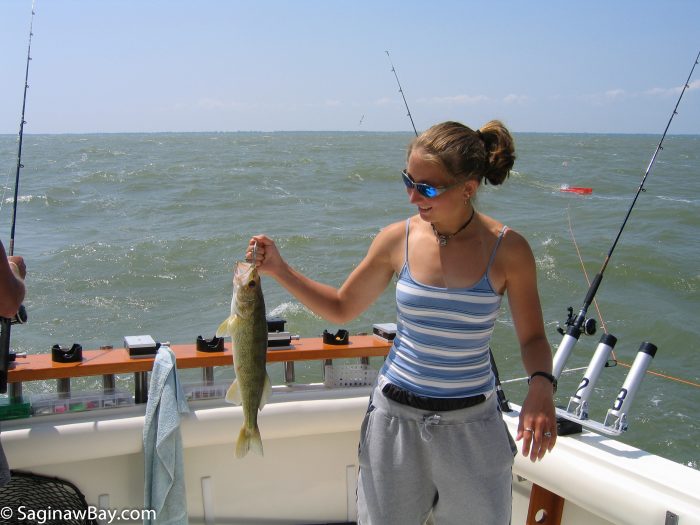 Saginaw Bay walleye were caught off Gambill’s Marina in six to eight feet or off Linwood in eight to 20 feet when trolling flicker shads. Smallmouth bass were caught and released around Spoils Island. Tube jigs were the ticket. Up the east side, walleye catches improved as water temperatures warmed. Fish were caught off Quanicassee in 10 to 12 feet. Some were getting five to eight fish per boat along the south end of the Slot in 14 to 17 feet. Anglers need to move around and switch from body baits to a crawler harness. Two brown trout were caught in the Slot which is very rare. Boats are starting to troll for walleye off Port Austin in 15 to 20 feet.

Tittabawassee River was high and muddy. Parking lots at the various launches were partially flooded but anglers were able to use the Caldwell launch, the one behind Busch’s Tool Supply and the Center Road launch. Only white bass were caught.

Flint River is producing some walleye from the Holloway Dam to Columbiaville.

Au Gres Area some limit catches of walleye were taken between here and the Singing Bridge in 15 to 20 feet with husky jerks and body baits. Near the Charity Island, walleye catches were scattered.

Outer Saginaw Bay
Oscoda trollers had decent catches of lake trout with spoons, body baits or spin-glo’s in 20 to 50 feet. The fish were scattered. Walleye were caught when trolling body baits near the mouth of the river. Pier anglers caught walleye early or late when casting body baits or still-fishing with minnows.

Tawas Area walleye and lake trout were caught when jigging or trolling around Tawas Point and the artificial reef in 15 to 25 feet. Walleye and a couple large Chinook salmon were also caught. Pier anglers caught brown trout and Atlantic salmon.

Fishing Tip: Use a spinnerbait to target bass

As water temperatures rise, both largemouth and smallmouth bass will start to hang out in shallower water and stick close to areas with cover. Want to know a great tool to target them there? Try a spinnerbait.

Seek out cover; such as logs, boulders or weed patches and cast your spinnerbait in that direction. Often you’ll entice a bass ready to strike unsuspecting prey.

Want to learn more about one of Michigan’s most popular fish species? Check out the DNR’s website.

Walleye and Sauger: Walleye and sauger are lookalike cousins that are members of the perch family. Although they are not exceptional fighters, they excel as table fare.