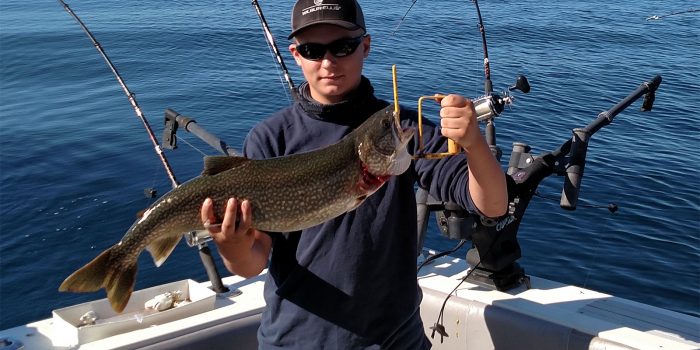 Lake Huron Fishing Report:  Alpena a good number of lake trout were caught off Thunder Bay Island when trolling spoons, body baits, or spin-glo’s in 30 to 60 feet. A few walleye were caught when jigging minnows or soft plastics near the mouth of the river. Pier anglers casting body baits caught walleye in the evening. Suckers are in the Devils River.

Harbor Beach was producing trout, salmon and walleye depending on the wind.

Oscoda trollers had decent catches of lake trout with spoons, body baits or spin-glo’s in 20 to 50 feet. The fish were scattered. Walleye were caught when trolling body baits near the mouth of the river. Pier anglers caught walleye early or late when casting body baits or still-fishing with minnows.

Port Sanilac trollers caught salmon, trout and a few walleye north of the port with spoons and body baits in 15 to 30 feet.

Presque Isle had few anglers. Lake trout should be in the area. Look for Atlantic salmon around Stoneport when trolling near the wall. Fish waters up to 60 feet deep and keep the lines in the top 15 to 20 feet with spoons and body baits. Good colors are orange, green, blue, silver and chartreuse.

Rogers City surface water temperatures were 36-38 degrees, so the water still needs to warm up. Atlantic salmon should show up soon so try casting bright colored spoons and body baits. Head south towards Swan Bay, Adams Point and Calcite Harbor and use anything that looks like smelt such as small spoons in waters less than 60 feet deep. Stay in the top 15 feet with planer boards 60 to 100 feet back.