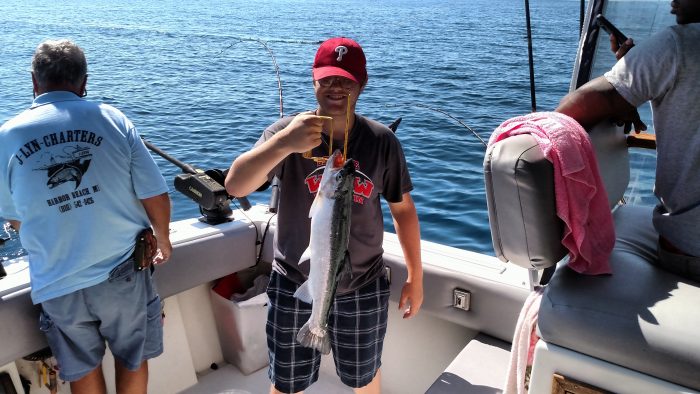 Southern Lake Huron
Lexington: Catch rates were slow with a few lake trout and salmon mixed in. The fish were scattered in 18 to 50 feet. Most were using body baits, but some were using downriggers with spoons. Pier fishing was slow.

Harbor Beach: Anglers caught a light number of trout, salmon and even walleye in 20 to 60 feet. A few smallmouth bass were caught and released by pier anglers.

Northern Lake Huron
Cheboygan River: Anglers caught a few walleye when jigging a soft minnow, casting crank baits or when drifting worms on a crawler harness. The fish were running 14 to 19 inches. A couple Atlantic salmon were caught on crank baits near the DNR station. A good number of suckers were caught at the dam, near the walking bridge and the DNR station when using worms.

Rogers City: Anglers were finally able to get out for a couple days but found cold water temperatures between 36 and 41 degrees. A few lake trout were caught however look for surface water temperatures to get up to 45 degrees for the good lake trout fishing to start. For Atlantic salmon, try casting orange, orange and gold, green and white or silver spoons and body baits off the breakwall. Those trolling should head south to Swan Bay, Adams Point or Calcite Harbor with body baits that look like smelt and stay in the top 15 feet of waters up to 60 feet deep. Lake trout were caught on spoons and a dodger or cowbell with a spin-glo.

Presque Isle: Boat anglers caught a few lake trout in 40 to 100 feet when trolling a dodger or cowbell with a spin-glo or spoons in the top 15 to 20 feet. Orange, green, blue, silver, yellow and chartreuse were good colors.

Thunder Bay River: Most of the suckers have dropped off the gravel but the steelhead fishing was still slow. A couple steelhead and smallmouth bass were caught up near dam when casting crank baits or drifting flies and beads. Those trolling or casting body baits as well as those jigging minnows or soft plastics caught walleye near the mouth. The odd channel cat was caught on crawlers. One gate was closed at the dam. Water levels were high.

Au Sable River: Steelhead fishing picked up again and the suckers were dropping off the gravel. Drifting or floating beads, flies and spawn worked best. Fly anglers with egg patterns or nymphs have also caught fish. Those casting body baits or floating crawlers caught walleye and smallmouth bass in town and near the mouth. The river was high, and temperatures were just above 50 degrees.